To economize sustainably and process the peels as a raw material, there are a number of options. One common and well-known method is to make orange cleaners, which use the fresh scent of the essential oils from the peels to create a pleasant smell in the room. In addition, the orange oil helps to remove lime scale or grease stains. The cleaning products are very popular due to their natural active ingredients, because on the one hand, they are harmless to health and, on top of that, they are better for the environment, as they do not contain any corrosive chemicals.

Additionally to the essential oils, the pectin can also be extracted from the peel. This is mainly found in the white skin of the orange peel. It is composed of plant polysaccharides and is also found in many other fruits. Pectin is often used in jams as a natural and vegetable gelling agent. Producers of oranges can save on disposal costs by passing on the peels and aim for a sustainable circular economy by reusing them in other industries. 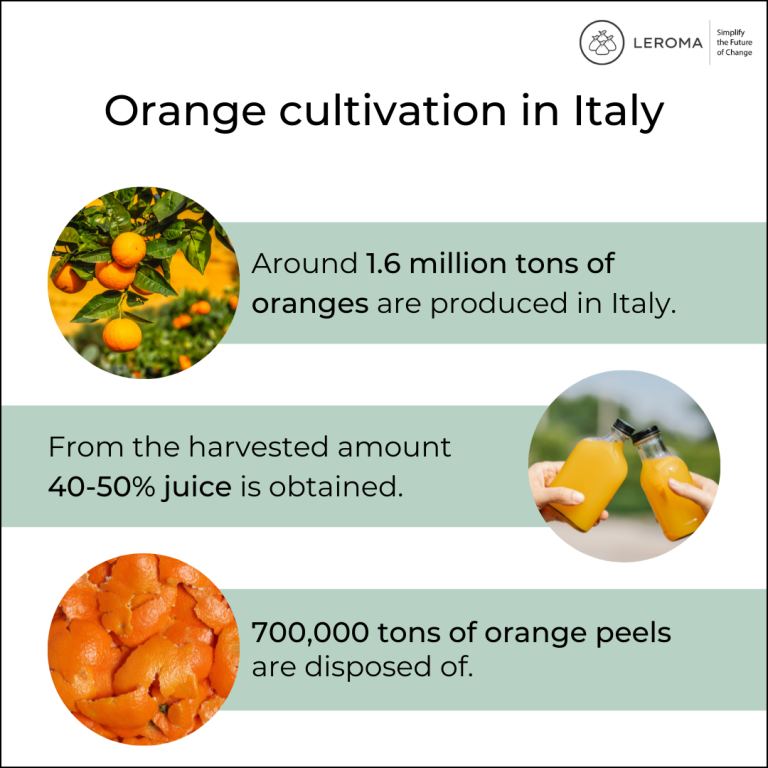 Some companies have come up with other innovative ways to recycle the large quantity of peels to act more sustainable.

Bio-based plastics and packaging material can be made from the peels of the orange. The packaging is then made from sustainable, renewable raw materials, unlike conventional plastic packaging that is produced from finite fossil petroleum. Not only is this method more sustainable in terms of production, but the material decomposes much faster at the end of the value chain, making it more environmentally friendly.

Researchers at the University of Bayreuth have developed a process that uses a compound of orange peel and carbon dioxide to produce a polycarbonate that has similar properties to conventional plastic. In the process, the natural substance limonene is extracted from the peels, oxidized and combined with carbon dioxide, from which the bio-based plastic is then produced. This alternative to plastic offers several advantages: the antimicrobial polymers can prevent the accumulation of E. coli bacteria, making it well-suited for use in medical settings by reducing the risk of infection.

In addition, the plastic is water-soluble and thus would not contribute to ocean pollution once it gets in. By the way, biobased plastics can be made not only from orange peels, but also from many other biological raw and residual materials.

Designer lamps made from orange peel

Another way to recycle orange waste is to use it to create design objects. The Italian company Krill Design has designed a lamp from orange peels. The lamp is created in a 3D printer using the orange peels as printing material. A mixture of the peels and a biopolymer base creates a velvety and robust material that, when printed, strongly resembles the surface of oranges. The lamp is printed by a single molten thread of the biomaterial in a continuous spiral motion. The process is called "Vase Mode" and gives the lamp its characteristic ribbed look. In one lamp are processed the peels of two to three oranges. Because of its composition, the lamp is biodegradable, compostable and recyclable. However, this does not limit its durability.

In addition to the two lamps, Krill Design also produces a tray and a glacette (cooling container for drinks) from orange peels - also via 3D printing. Each is produced using the "Vase Mode" method. All design items are reminiscent of the source material, orange peels, through their color and texture. 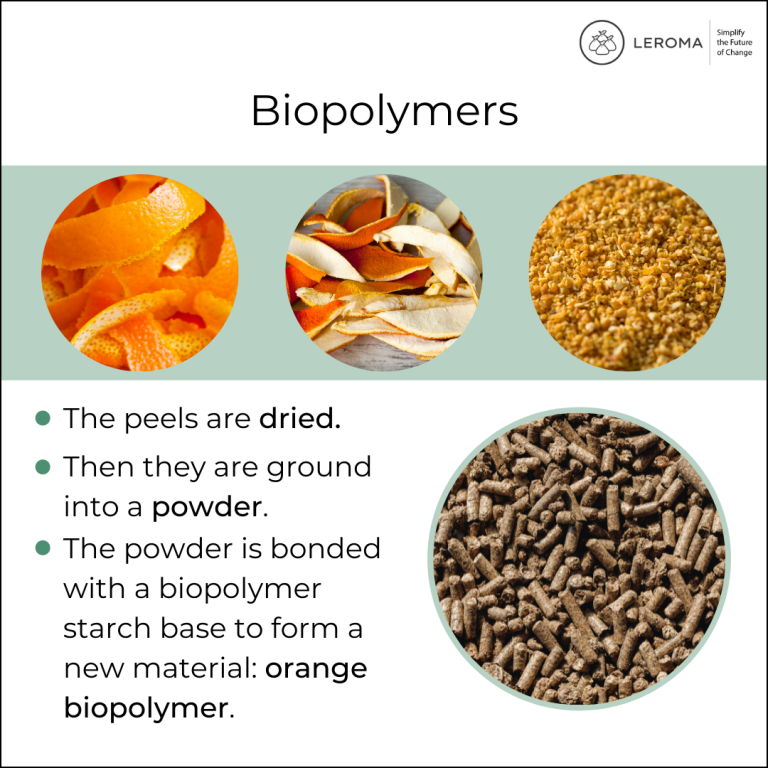 The company's goal is to reuse organic waste from the food industry through a circular economy process that turns natural resources into eco-design products.

Yarn and textiles from orange waste

The company Orange Fiber, also based in Italy, produces textiles or yarn from orange peel fibers. Orange Fiber is the first brand in the world that produces sustainable textiles from citrus fruit waste. The innovative technology used to produce the cellulose fibers has been patented in major producing countries worldwide since 2014.

The two founders developed their method based on a research paper whose research question was whether a high quality silk cloth could be made from citrus fruit peels. For the production, cellulose is extracted from orange waste and converted into a biodegradable fiber. This is then made into orange fiber yarn or fiber blends with silk. For this purpose, the cellulose is processed into yarn using chemical reagents, dyed, and can subsequently be blended with other textiles such as cotton or polyester.

In addition to the sustainable extraction of the yarn and the use of natural raw materials in the textile industry, textiles made from orange fibers have the advantage that they still contain essential oils that are released with skin contact and warmth, thus acting as a skincare when worn.

Another method of recycling is the use of orange waste in the recycling of old lithium batteries. Since the classic processes of recycling batteries produce pollutants, approaches were first developed to recycle batteries with the help of additional chemicals. Meanwhile, the chemicals can be replaced by orange peels. In both methods, the precious metals are separated from the used batteries and can later be reused in the production of new batteries.

In order to do so, the used batteries are first shredded and crushed. Then the precious metals are extracted from the mass by dissolving them in a mixture of acids and chemicals under heat before the other metals decompose. Instead of chemicals, a combination of orange peels, dried in an oven and ground into powder, and citric acid will now achieve the same goal and dissolve the mass. The process then uses natural residues to conserve resources.

Side streams or residual materials are not uncommon in the food industry. Particularly in view of finite raw materials, it will become increasingly important in future for companies to look at alternative processing methods in order to work in a way that saves resources and thus create a sustainable circular economy. The idea of sustainability already plays a decisive role in the B2C sector and should also receive more attention in the B2B sector.

Let's simplify the future of change!